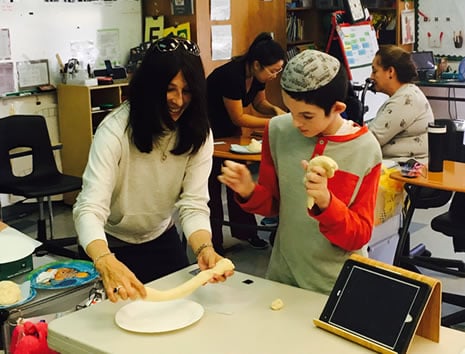 It all began when I received an email from Chaim Boruch’s new teacher.

I was in midst of hectic dinner preparations while bracing myself for hurricane homework.

I glanced at the email asking me if my husband and I would like to come to Chaim Boruch’s class to talk about being Jewish.

At first glance, all I saw was a task I wasn’t sure I even knew how to approach.

This may sound strange, but as much as I know how to interact with Chaim Boruch, figuring out how to speak to an entire class of non-verbal special-needs children found me feeling quite intimidated and underqualified for the task.

I continued chopping my salad and practicing my math skills (not an award-winning moment) and found myself relieved to get distracted.

An hour later, experiencing the calm after the storm, I sat next to Chaim Boruch on the couch.

All of a sudden, as if hit by a bolt of incredible clarity, I sat up facing Chaim Boruch and asked him if he would like to make a challah-baking workshop for his friends at school.

His little face brightened with that exquisite smile as he flashed those soft loving eyes at me.

I continued talking to him excitedly as I rambled on about all the special things he could do . . . give out parchment paper, challahdough, sprinkles, chocolate chips and demonstrate how to squish, squeeze and roll the challah dough!

We made a list together, and by the time we both went to sleep, we knew that a most special challah experience was about to be born.

And so it was.

This morning we arrived at Chaim Boruch’s school.

Chaim Boruch got up from his seat and began to pack away his iPad and schoolwork. It’s a typical response for our son, who gets very thrown off by seeing people out of context.

In other words, if you are here, then we need to go home now.

Well. Not so fast, as I gently maneuvered to his seat.

I put my arm around his shoulders and whispered in his ear that since he is in charge of running the challah-baking workshop, we could not yet leave.

He paused for a moment and tested out his stubborn gene while everything I had indeed worried about seemed to unfold before my eyes.

So I excitedly grabbed his hand and walked over to the overflowing bowl of challah dough.

And then his eyes lit up.

I could see him recall all the things we spoke about for the past three weeks and now was his moment to shine.

And there before me, my special-needs son who was told he would never walk, never hold up his head, never communicate, ran the most incredible challah-baking workshop I have ever experienced.

Parchment paper was given out with a smile, mounds of squishy challah dough were tested by our in-house challah workshop coordinator and given with exuberance to each friend, aid and teacher.

Chaim Boruch stood tall with pride. He stood strong like a shliach.

And he brought a piece of Jewish life to the world around him.

My eyes filled with tears of gratitude, appreciation and love.

How incredible life is, living side by side with my precious Chaim Boruch.

An incredible soul who ran the most special challah-baking workshop that ever existed.